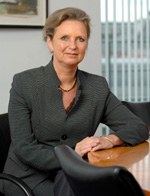 Over 20 years closely associated with the build-up of environmental & social programs and policies at the World Bank, where she was responsible for the implementation of major investment programs, holding successive senior management positions.

Ph.D. from the Universities of Bonn and Cologne, Germany; Honorary Doctorate from Oxford Brookes University, UK

Earth3000 collaborates with WWF Deutschland, the European Environment Foundation, the Commission for Social and Economic Policy, among others > further information